Here’s the first thing I hear when I tell someone how much protein I eat: That’s bad for your kidneys.

Are all these people doctors? Nephrologists? Psychics, perhaps, who are in touch with my kidneys through the other side?

Nope, but somehow the average person just knows that eating, say, 35% of one’s calories from protein will be bad for the kidneys. Have a few too many chicken breasts and you’ll end up on dialysis or feeling like you’ve slept with a cinder block under your lumbar spine.

Ask these folks what protein actually does to kidneys and you get a lot of vagueness. It’s just bad.

Meanwhile, the cola-chugging, fry-chomping, immovable object known as my office mate is left unquestioned about their lifestyle choices.

But is it actually true that protein will harm my kidneys?

Before I review this concept, let’s talk about what kidneys do, as well as a few measures your doctor uses to see whether your kidneys are happy and functioning.

Kidneys do several things. They:

The argument about protein hurting kidneys — if anyone can actually substantiate it — comes from the theoretically increased load of having to process protein. The idea is that more protein equals more of a filtration challenge for the kidneys, which then triggers the inevitable kidney explosion or renal labour strike.

There are about half a dozen measures used for kidney function but they all measure how much fluid (blood plasma) your kidney filters at any given time.

Thus, we can use these types of measures to see whether the kidneys are, in fact, working properly. This week’s study uses kidney tests along with other tests to determine the safety and usefulness of a high-protein diet in a population who is already at higher risk for kidney damage.

So now that we know how to assess kidney function and potential damage, we can use these tests to figure out whether high-protein diets do, in fact, harm the kidneys.

Obesity and type 2 diabetes can cause and exacerbate poor kidney function (1). One large-scale study found, for instance, that end-stage renal disease (ESRD) increased proportionately to body mass index (BMI): as BMI went up, so did kidney disease.(2) 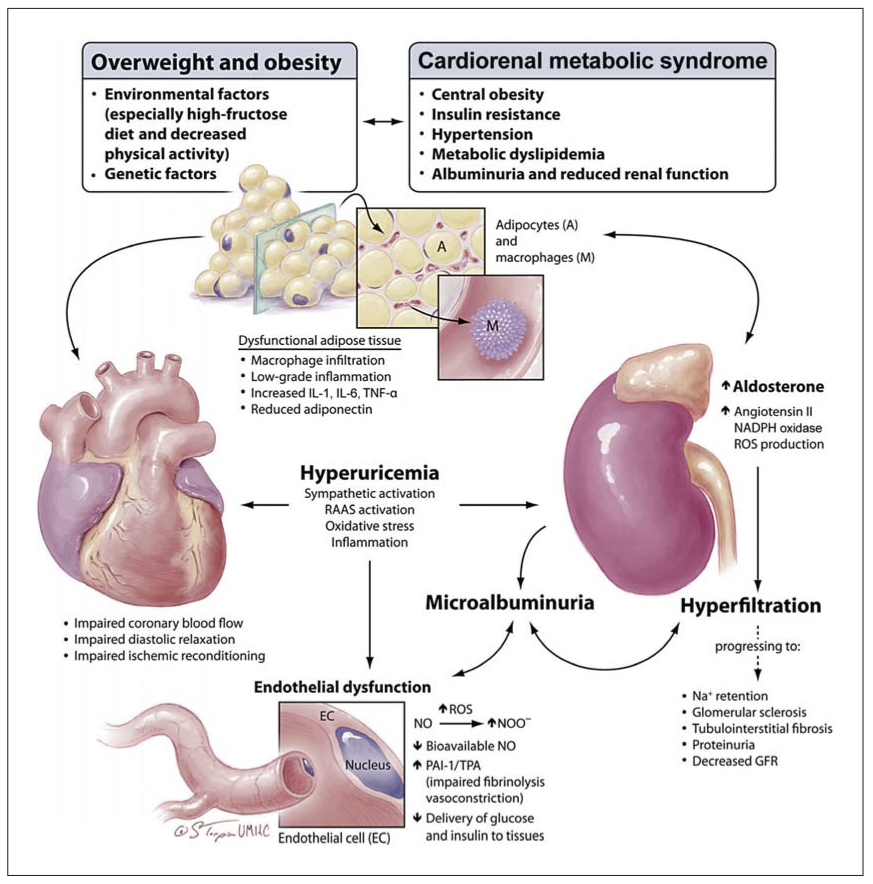 This week’s study examines a high-protein diet and resistance training for people in a high-risk group: those that are overweight or obese and have type 2 diabetes. Contrary to popular expectations, their kidneys didn’t explode.

Participants were men and women with an average:

In this study there were four groups:

The study lasted 16 weeks. Body weight, body fat, blood pressure, strength and blood tests were recorded before and after.

Definitions of “high protein” vary in the literature. For bodybuilders and strength trainers, 2.2-4.4g of protein per kilogram of weight per day  (1-2g/lb/day) is common.

While this amount may be higher than conventional food guides would suggest, based on what bodybuilders and strength athletes normally consume, I wouldn’t call this truly a high protein diet.

Groups 3 and 4 trained with resistance 3 times a week, with at least one day’s rest between workout days.

Each workout involved eight exercises with 70-85% of their 1 repetition maximum for 8-12 repetitions for 2 sets, with 1-2 minutes rest between sets. Weight was increased if they could do more than 12 reps for both sets.

All exercises but sit ups were done on machines.

All in all, not a particularly impressive workout program, but going from nothing to something is going to improve strength and muscle mass regardless.

Both groups that worked out (CON+RT & HP+RT) got stronger while the other groups (CON & HP) got weaker when you look at their 1 RM on bench press (Figure 3).

All groups had significant improvements in:

There were no differences between groups as far as blood measures go, though the authors suggest that having more people (increased statistical power) in the study would have helped show some blood differences. They argued more people in the study may show more blood measure improvements in the HP+RT group since they had marginal blood improvements across the board. But until they do a study with more people we can say for sure this is just speculation.

The HDL cholesterol was a little strange: it went down a little bit (0.1 mmol/l) over the 16 weeks in all the groups except the CON. 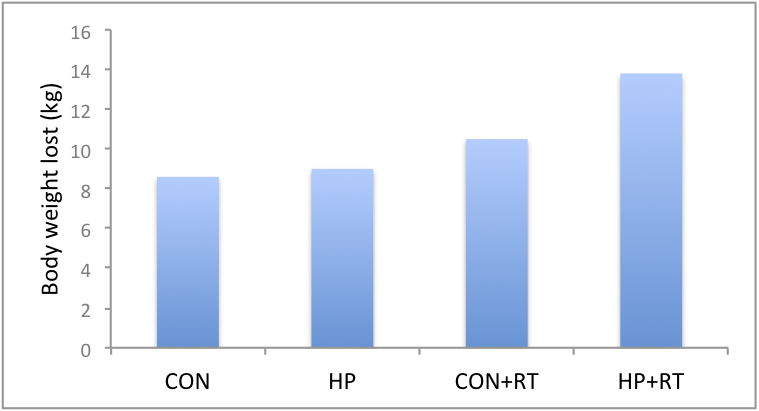 Figure 1: Body weight lost after 16 weeks of the experiment 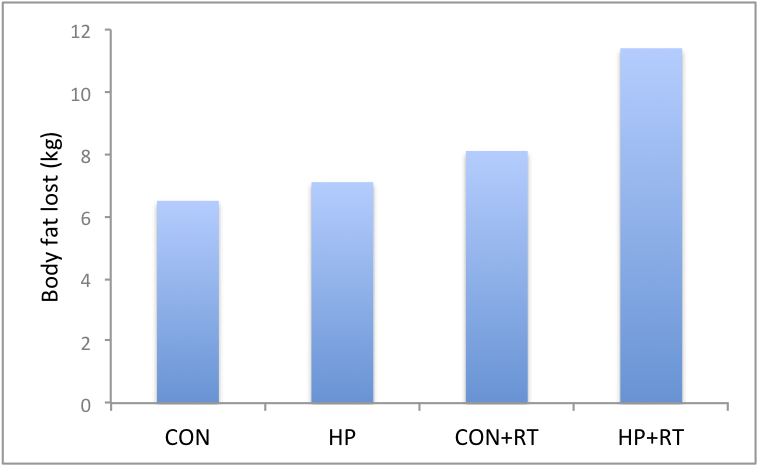 Figure 2: Body fat lost after 16 weeks of the experiment 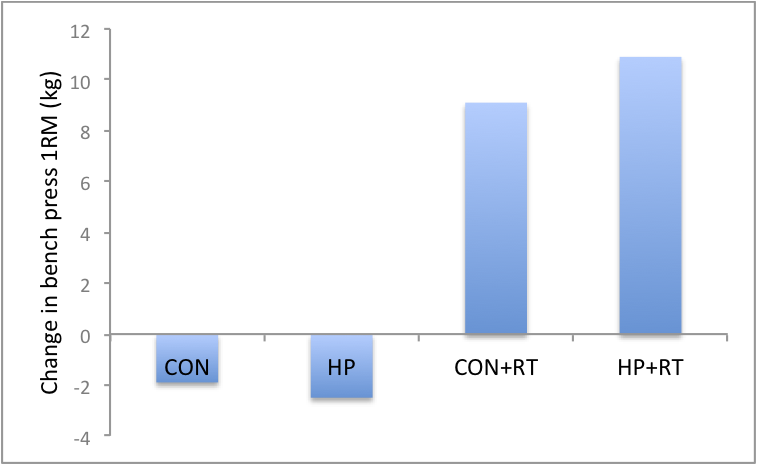 Figure 3: Change in bench press strength as measured by 1 repetition maximum after 16 weeks of the experiment

Here’s some data to help you stave off the Protein is going to make your kidneys explode crowd.

Since diabetes is the biggest cause of kidney failure and obesity is a contributing risk factor, you’d think that these overweight and obese diabetics eating high protein diets would have signs of kidney dysfunction. Nope.

Using creatinine clearance and urinary albumin to measure kidney function, the researchers found that there was no difference in these measures between the high protein diet and the control diet. Over time there was a decrease in creatinine clearance, but an improvement in microalbuminuria.

Overweight and obese diabetics (type 2) who eat a high protein (33%) but calorically restricted diet while weight training lost more overall weight and fat, and reduced their waist girth more, compared to those who were on a calorie-restricted diet with 19% protein.

There were no differences in blood lipids or other blood measures between groups (though with more participants, high-protein would have fared better), though there was an improvement over the 16 weeks of the experiment.

Despite concerns that high protein diet would comprise kidney function (especially in diabetics who are at high risk for kidney failure) there were no differences between groups and kidney function measures.

Obese and overweight diabetics on a high protein diet or a control diet for 16 weeks had the same kidney function. Added protein had no negative effects, even in these folks who were at higher risk.

Enjoy your protein shakes, everyone.