Carbohydrate tolerance:
Is your ability to eat carbs determined by your genes?

Ever wonder why some people can eat bushels of bananas without gaining a pound, but you seem to gain weight by just looking at a potato? Maybe it’s your genes. But just because you’re “carb intolerant” doesn’t mean you’re doomed. These simple guidelines can help.

[Note: we’ve also prepared an audio recording of this article for you to listen to. So, if you’d rather listen to the piece, click here.]

You and a friend sit down for dinner.

Your friend orders a rice and potato sandwich with a side of spaghetti.

“I’m carb tolerant,” he explains, taking a sip of his beer and glancing eagerly at the dessert buffet.

You, on the other hand, order the green salad with salmon — hold the chickpeas.

You are not carb tolerant.

But you are annoyed with your friend.

In fact, for a bite of his sandwich, you would gladly stab him with a fork.

What is “carb tolerance” anyway?

Actually, come to think of it, does “carb tolerance” even exist?

Sure, the phrase peppers a lot of contemporary dinner conversations.

But does anybody really know what it means?

Or maybe the problem isn’t carbs at all. Maybe their “baked potato” has more sour cream and butter than potato.

Then again…maybe some of those people simply can’t process carbs the way the rest of us do.

In other words, maybe their genes are to blame.

Guess what? The genetic explanation isn’t completely out to lunch.

Recently, researchers found a correlation between obesity and a person’s ability to make amylase, an enzyme that helps to break starch down in your mouth.

But why would amounts of this enzyme differ from person to person?

After all, as humans we evolved to eat a varied diet including a wide range of macro- and micronutrients. You’d think we’d all be roughly equal in terms of our digestive abilities.

And yet, we’re not — or not necessarily.

There’s even a term for why this happens: genetic polymorphism.

Polymorphisms are natural variations in a gene, DNA sequence, or chromosome that show up in behavior or physiology (phenotype).

They’re what make you different from the person sitting beside you.

You might even say that they’re what make you you.

Most polymorphisms are small, involving a single base pair. To imagine how that plays out in the body, compare it to changing a single letter in a book. It results in a difference so minor that most people would never even notice it.

But sometimes the differences are much bigger — involving a complete chromosome. That’s more like gaining or losing an entire chapter of a book. Differences like that result in very obvious variations between individuals.

And of course, genetic polymorphisms can also be anything in between.

Here are some examples.

One well-known SNP is a variation of the CYP1A2 gene.

Depending on which version of CYP1A2 you have, you’ll metabolize caffeine faster or more slowly.  If you have the faster version you’re “caffeine tolerant,” since you clear it out faster. (For more on that, see All about coffee: Good for us? Or disease waiting to happen?)

SNPs give rise to to relatively minor polymorphisms, such as variations in caffeine tolerance.

But polymorphisms can also result from changes to the number of genes.

These are called copy number variations (CNVs), which can create some significant differences among people.

Either way, there had to be two copies of the gene — no more, and no less.

For a long time, scientists believed there were always two copies of a gene, and any differences between two members of the same species had to do with subtle differences in the gene itself.

You might have more than one version of a gene, triggering many potential differences. Or you might have a single point mutation (SNP) giving you nearly unlimited possibilities for variation. But no matter what, you were stuck with two copies.

Turns out, there’s more to this story.

You can, in fact, have more than two copies of a gene.  Or you can have fewer than two.

And the two main forms of CNVs are — not surprisingly — duplication (adding genes) or deletion (removing genes.) Instead of the standard two copies of each gene, you might have zero copies. Or three copies. Or even thirty!

Scientists guess that up to 12% of our DNA has CNVs. You and I (or any two random people) differ by at least 1% genetically — mostly as a result of CNVs. Even identical twins can have different CNVs.

CNVs have been associated with many complex diseases, ranging from Lupus to Crohn’s. CNVs have also been linked to resisting HIV infection.

CNVs may also give us one clue to carb tolerance.

Salivary amylase (α-amylase) is an enzyme in your saliva that starts the digestion of starch.

We’ve known about amylase for a long time. (In fact, the first scientific article about it was published over 100 years ago!)

The gene that makes amylase, AMY1, varies in copy number from person to person.  And AMY1 genes have a huge CNV range, from two to sixteen copies.

As soon as you bite into that potato or plantain, your AMY1 goes to work.

And again, if you have more AMY1 genes, your carb-digestion work crew will be bigger and faster.

In 2007, researchers learned that people living in cultures that traditionally ate high starch diets had more AMY1 copy numbers and more amylase enzyme in their saliva.

(By the way, chimpanzees have two copies of AMY1.) 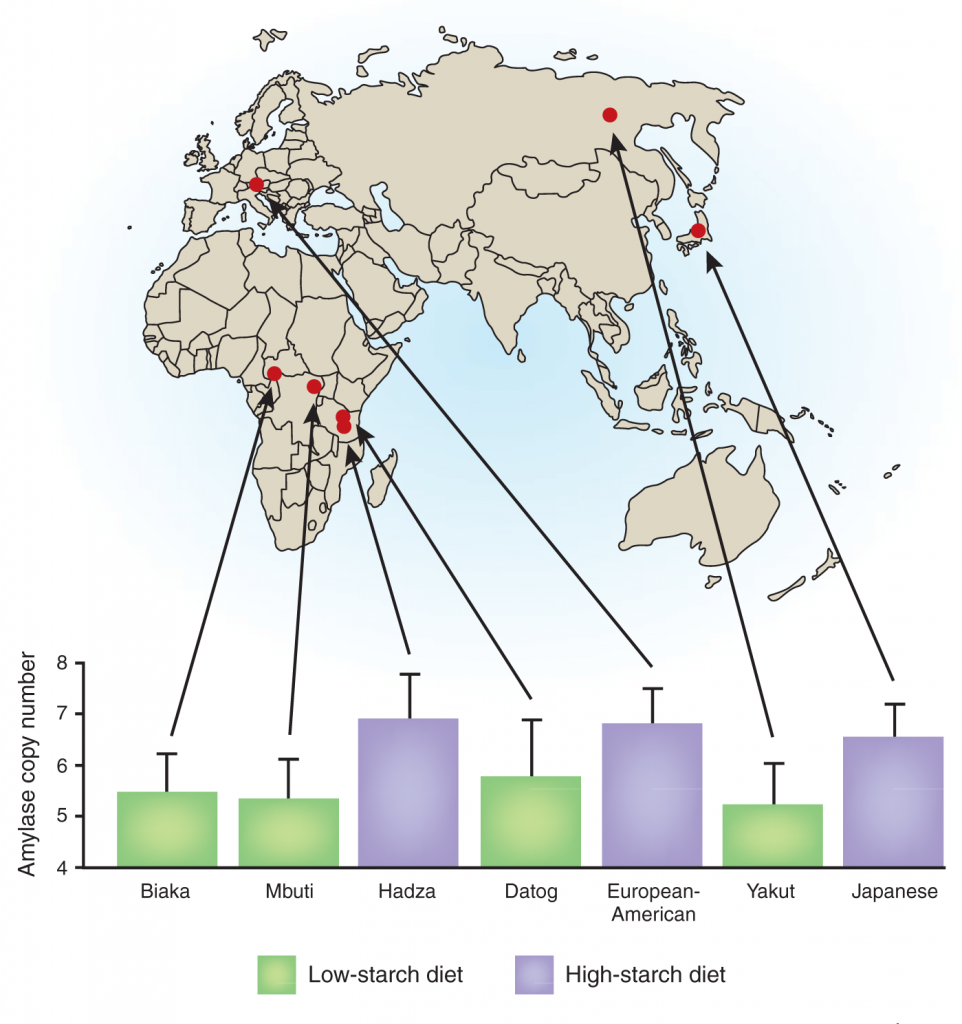 This makes a lot of sense if you think about it.

After all, if you eat more starch, you need more of the enzyme that breaks down starch.

But what happens to people who have fewer copies of AMY1 in a world where everybody has access to high starch diets?

That’s what the scientists who performed this study wanted to find out.

Researchers compared the genes of 149 Swedish families (342 Swedes) that included siblings with a body mass index (BMI) differing by more than 10 kg/m2.

In comparing the siblings, they used a specific genetic study (gene centric associations study; GCAS) to look for CNVs that are associated with variations in BMI.

Studies like this — population genetics — need to examine a lot of statistics to ensure the reliability of their findings.

Initially, this study turned up seventy-six CNVs that could explain differences in BMI.

But all except AMY1 turned out to be false positives.

Meanwhile, further research involving subjects from the UK, France, and Singapore only confirmed the AMY1 and BMI connection.

For instance, they looked at the DNA of brothers and sisters from English families (TwinsUK), one of whom was lean and one who was overweight, to see if they could find any differences in any of the CNVs that might explain the difference in obesity.

People who have more copies of AMY1 (the gene that makes amylase) have more salivary amylase and lower BMI.

If you have more than nine copies of AMY1 then you are eight times less likely to be obese compared to someone who has fewer than four copies of AMY1.

But, before you start blaming all your tendency to gain weight on your genetic inheritance, it’s important to note the total BMI range was only 2 kg/m2,  from 25 to 27.

So while “carb intolerance” may influence your tendency to gain weight, it’s not the only factor involved.

This is the first study to link carbohydrate metabolism to obesity through salivary amylase and its gene (AMY1).

The findings suggest that there really is such a thing as “carb tolerance.”

People with more AMY1 are lucky.

Perhaps this also helps explain why eating slowly generally promotes weight loss (or maintenance). The more slowly we eat, the more we digest in the mouth. This in turn might lead to feeling “satisfied” with less food.

They tolerate glucose better.
Higher levels of salivary amylase correlate to a higher pre-absorptive insulin response, and this is key to glucose tolerance. The reasons aren’t completely clear, but it may be because amylase breaks down carbohydrates into glucose and short chain sugars (oligosaccharides) that bind to sweet receptors or oligosaccharide receptors, signalling the release of insulin.

Everything’s lower GI to them.
Different amylase concentrations essentially result in different rates of carbohydrate absorption of the same food, or a different glycemic index for each person eating a given food. In other words, dozens of years of glycemic index may have just been foiled by this new finding.

Yikes! As if this weren’t complicated enough!

What you can do?

While all this sounds complicated, there are some simple solutions.

If, based on your genetic inheritance, you think that you may have fewer copies of AMY1 and may, as a result, have low carb tolerance, there are a few things you can do to ensure that you stay healthy and lean.

After all, even people on the low end of the amylase production spectrum still make more amylase than chimps and nearly all other mammals.

Chimps may not eat bread, but they do eat carbohydrate-rich fruits — bananas being the most obvious. And it’s not too often that you see an overweight chimp.

So go ahead and eat that sweet potato.

Just try to refrain from stabbing your carb-tolerant friend with a fork.