Baseball is a game rich in traditions. Two of those traditions are heaping plates of pasta at the pre-game meal and coolers full of Gatorade. Coaches have long assumed these carb-rich staples are keys to getting the performance edge.

This was certainly the game plan for Shawn Haviland all through his years of college ball and even into his first season in the minors. But after just one off-season of overhauling his nutrition and training with the help of Cressey Performance and Precision Nutrition, Shawn Haviland has learned that the only things these foods enhanced were the size of his gut and his body’s resistance to burning fat.

With a Harvard diploma in hand, Shawn Haviland could have pretty easily stepped into a high salary career in the corporate world last spring. But the baseball mound won out over the boardroom. Scouted during his college ball years and then selected by the Oakland Athletics in the 33rd round of the amateur draft, he opted for a different path — the one that he says he’s been dreaming about his entire life.

In his rookie season pitching for the Vancouver Canadians, the Athletics farm-team, the right handed pitcher started in a relief role but earned his way into the rotation of starting pitchers by mid-season. Shawn finished his season strong, but wasn’t content to rest there. He wanted to keep getting better, and keep the mometum going. Thus he sought out the services of Eric Cressey and the Cressey Performance team.

Although Shawn had worked out 3 to 4 days a week since he was a freshman in high school, he had only marginal strength gains and little change to his body composition to show for it. He knew something was missing.

Within a month of training with the Cressey Performance team, he found the missing piece: his diet. When the team introduced Shawn to the 10 Habits, Shawn’s strength levels improved significantly and he finally began to see real changes in his body — mostly the loss of his gut that he’d built up for four years at Harvard. His vertical jump went from 21.8 to 28.9 inches — a 19% increase in peak power.

Of all the 10 Habits, the most immediate change to Shawn’s body composition came from not drinking any calories. Prior to being introduced to this idea, he would routinely drink between four to eight 32 ounce Gatorades every single day. “Looking back,” he recalls, “it was no wonder that I couldn’t lose any weight. I could never get to a calorie deficit when I was drinking more than 1000 calories per day.” A much better use for Gatorade.

Following the rest of the habits definitely made a difference too — not just to the size of his gut but in almost every part of his life. Prior to paying closer attention to his nutrition, Shawn never ate breakfast, mainly because he couldn’t drag himself out of bed before noon. Now, Shawn’s still not exactly an early bird, but he’s working on it. “I wake up fully rested every day at 9 am at the latest and enjoy breakfast.”

And now, one of his favourite ways to start the day is a mushroom, onion and pepper omelet. “It’s funny,” he says, “because before Precision Nutrition I was very picky and would never eat mushrooms, but now I try to include them in just about every meal. I’m addicted.”

The change doesn’t stop when the breakfast fork drops, either. “Throughout the day my energy levels have been significantly higher and I no longer need that 3 pm nap. On the baseball field I used to be towards the back of the pack in terms of conditioning, always struggling to make the allotted time. This is no longer the case as I routinely finish in the front during conditioning. On the mound I am throwing harder with less effort. Obviously this is not all a result of changing my diet but I would not have been able to make the strength gains if I was not providing my body with the correct fuel I would have essentially treading water.” 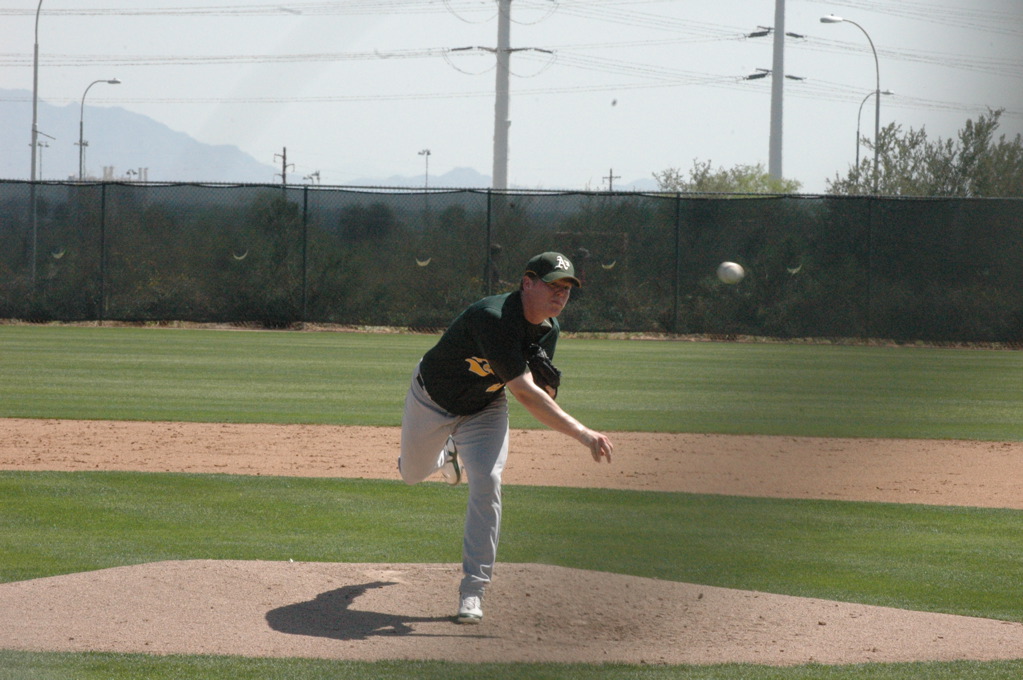 Now, Shawn can boast 90% compliance with his nutrition.  But he’s also succeeded by surrounding himself with both the right food and the right people. With more attention to the prep and planning of his meals ahead of time, Shawn always had the right foods on hand, and could easily make healthy and smart choices when he got hungry and needed to eat.

Once he had his food under control, Shawn sought support from the people close to him. Believing that “you are the average of the people that surround you”, he found a friend in the area who plays with the Milwaukee Brewers, who was also eating the same way, and they decided to shop for foods and eat the majority of our their meals together. Once they started doing this, they both had a great deal more success.

Despite these strategies, the start of spring training brought new challenges to eating properly.

“The team is generally on the field for hours at a time (pushing the limits of the 3-hour rule) and the food provided for the team misses every single habit. This is combined with the fact that our hotel obviously doesn’t have a kitchen, so cooking is out of the question. I had to be creative in terms of getting my protein and vegetables, and had to make up some calories later in the day with some larger meals so that I didn’t lose 10 pounds in 3 days like I did the first 3 days of spring training.”

Here’s how Shawn worked around some of the challenges of spring training:

7 am – Breakfast: The team is provided with eggs, bacon, hash browns, toast and cereal. Shawn would eat the eggs, and supplement with a shake of Metabolic Drive and Superfood.

9 am – Stretch: Knowing that he’s going to be on the field from 9 until about 12:30, Shawn eats a Metabolic Drive protein bar as he’s walking out to stretch. “Not ideal but better than nothing.”

12:30 – Lunch: Again provided by the team, lunch generally consists of a sandwich on white bread, a candy bar, a banana and a bag of chips. Shawn eats the banana, with some beef jerky and soy wasabi almonds that he brings from the hotel, along with another Metabolic Drive protein shake with a scoop of Superfood.

4 pm – Ruby Tuesdays: This is the only restaurant within walking distance from the hotel, so most days Shawn heads over there and orders 2 chicken breasts and the salad bar. The salad bar actually is pretty good, he says, and he normally ends up with a salad consisting of romaine lettuce, broccoli, asparagus, black beans, chicken, olive oil and balsamic vinagrette.

7 pm – Back at the hotel: Shawn does have a fridge so he’s able to keep some string cheese and other snack foods in there. Around this time of day, Shawn will have about 4 string cheeses and some more soy wasabi almonds (“they’re addictive!”).

10 – Pre bed time shake: Metabolic Drive (“Yes, I am getting sick of it”) and Superfood, where sometimes he’ll throw in some cinnamon to mix it up.

During the off-season, Shawn worked out very aggressively four days per week but since the beginning of spring training, his schedule has changed quite a bit. Mornings are spent on the field, while afternoons are usually scheduled games. Though Shawn doesn’t always pitch, he always has to be present at the game, and will work in an hour’s training session on the days he’s on the sidelines. Shawn’s on a five- day pitching schedule (i.e. he pitches every five days) so he organizes his training as follows:

During this time, Shawn works on maintaining his existing progress, and making sure that every 5 days he’s at his strongest.

In this 2009 season, Shawn’s currently playing with the Kane County Cougars, a Class A Affiliate of the Oakland Athletics.  He’s already had a successful first start this season, and it’s obvious that his commitment to better training and nutrition is getting results.

Though Shawn gained a wealth of knowledge during his time at Harvard, the time he’s spent pursuing his dream has also been a rich learning experience.

“Baseball has taught me that you don’t always have to be the biggest or most talented person to be successful. It is the person who has the capacity to work harder and is mentally tougher that ultimately succeeds.”

And through the Cressey Performance team and Precision Nutrition, Shawn has also gained the knowledge that your body can not perform at its maximum when you are over tired and ill fed.

“Fuel your body with the right foods and get the right amount of rest and you will see substantial gains in performance.”

Move over Gatorade and pasta, protein and vegetables are here to stay.