Microwave cooking:
Does it really strip nutrients and ruin our health?

Many people in fitness are completely freaked out by microwave cooking. They’re worried that the microwave destroys nutrients. Ruins food quality. Poisons our bodies.

Are any of these claims true? Should we be worried about microwave cooking (or reheating)? In this article we’ll find out the truth.

Which one of those is not like the other?

When we use a microwave, what purpose does it serve?

Are we using it to reheat our “unprocessed food” leftovers from a recipe we made after shopping at the farmers market? Or are we using the microwave to get that Pop-Tart juuuusssst right?

Up to 93% of American homes have and/or use microwaves, so obviously there is something appealing about them.

But do any of us really know the long-term health implications of repeated microwave use? And does microwaving food affect the nutrients it contains?

How microwave ovens came to be

Percy Spencer was building radars in the 1940s and discovered that microwaves from radars melted a candy bar in his pocket.

Fast forward seven years and we had the first “radarange” in 1947 at a Boston restaurant. It weighed about 700 pounds and cost nearly $5000. People weren’t excited about cooking food with “radar,” so the name was changed to “microwave oven”.

The first popular microwave for home use was introduced in 1967.

As more women were entering the workforce, anything that saved time in the kitchen was welcome. An advertising campaign coincided with housewives using microwave ovens followed by young female sales personnel travelling around North America proclaiming their benefits. 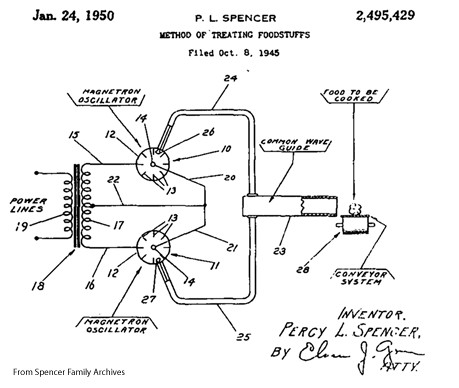 Conventional cooking transmits heat to the outside food by convection (baking), radiation (broiling), or conduction (frying). This heat then makes its way to the inside of the food. This can take a while, as anyone who’s frantically tried to roast a semi-defrosted turkey can attest.

Microwaves, by comparison, start on the inside of the food.

Microwaves are a form of electromagnetic energy (radiation), like radio waves or light waves. When absorption of microwave energy interacts with molecules in food, heat is generated and the food is cooked (think of rubbing your hands together really fast).

The source of radiation in a microwave oven is the magnetron tube, which converts an electric current to electromagnetic radiation. Microwaves can travel through glass, but metals reflect them. This is why microwave doors have a metal screen.

Because they heat the food from the inside out (rather than outside-in), microwave ovens have a better cooking efficiency (the % of energy that heats food during the cooking cycle) than electric or gas convection ovens.

The effects of microwaves on food

Although you may have heard that microwaves kill nutrition, that doesn’t seem to be true.

Microwave ovens usually don’t destroy nutrients in food. And in some cases, preparing food in a microwave might actually promote nutrient retention.

Nutrients are leached from food during any form of cooking, especially when the food is cooked for a long period of time with high amounts of water. So, for example, boiling carrots might strip nutrients much  more drastically than microwaving them, because the carrots’ nutrients might get washed away with the boiling water.

However, since we haven’t discovered all the compounds that make up food, we’ll likely never know all of the outcomes that microwaving has on nutrients.

Protein quality seems to be fine with microwave heating. Some data indicates that amino acids and vitamin B12 may be converted to inactive forms.

But on the flip side, availability of some amino acids might be improved, since no surface browning occurs. And microwave heating might lead to destruction of trypsin inhibitors in beans. Bonus!

Microwaving breast milk breaks down the antibodies and vitamin B12 (this also occurs with conventional boiling, but it takes about 25 minutes or more).

By the way, speaking of organic fluids, heating blood for transfusions in microwave ovens can result in hemolysis (but hasn’t been shown to damage DNA).

Microwave cooking doesn’t result in surface drying or browning reactions, so this alters the flavour and appearance of foods (especially meats and breads).

Some microwavable foods will come with a gray paperboard for heating. This paperboard contains an extremely thin metal coating of resistant polymer film which absorbs microwave energy, converting it into heat for browning. Certain additives can also be put on the surface of food to achieve this effect. Gosh, now I’m having flashbacks of microwavable pizzas in junior high.

The health effects of microwaves

They found subjects to have lower hemogloblin and higher white blood cells and blood cholesterol after eating microwaved food. However, this data was never published in a peer reviewed journal.

The Swiss appliance industry wasn’t excited about these results and took the scientists to court. Hertel and Blanc were convicted of interfering with commerce, but the ruling was later reversed (see reference section for more info).

When microwave ovens were first available to the public, tests showed that they leaked excessive electromagnetic radiation. This type of radiation is non-ionizing, which means that it isn’t the type of “radiation” you’d associate with Homer Simpson and Chernobyl — it’s in the form of waves.

Early microwave ovens worked by sending wavelengths similar to many of today’s phones (915 mHz). The main difference between phones and ovens is that the power needed to operate a microwave oven – about 1000 watts – is much greater than that needed for a cell phone. Cell phones operate with less power but at the same wavelength as microwave ovens.

In the United States, the FDA allows some radiation leakage. In the 1970s, Consumer Reports declared that microwave ovens were “not recommended,” and the Soviet Union actually banned microwaves for a short time (no countries ban them today).

Exposure to radiation is highest within two inches of the microwave. Yet, the amount of electromagnetic radiation we are exposed to from microwave cooking is less than cell phones (measured cumulatively).

When our body absorbs microwave radiation, we take on the energy as heat. Some tissues are sensitive to this.

Strong fields of electromagnetic radiation may raise cancer risk, affect the nervous system, and promote other problems (such as Alzheimer’s disease). There is a correlation between microwave cooking and oral cancers/salivary gland tumors, but this might be due to the production of heterocyclic amines in food.

Some data indicate that cooks may have higher risks of cancer due to microwave radiation exposure, but the body of evidence is still not clear on this.

If our only exposure to electromagnetic frequencies is via microwave cooking, it probably wouldn’t be a big deal. But add up total exposure and it becomes a concern.

We absorb EM radiation from power lines, cell phones, airplane flights, computers, fridges, and so forth. There is growing evidence that effects of microwave radiation add up over time.

However, the radiation from microwave ovens alone is so low that it shouldn’t damage DNA. And there is no legit data indicating a direct negative impact of microwave ovens on human health.

“We don’t have a solid position on the possible health risks from exposure to microwaves due to inconclusive research. The real question remains whether there could be cumulative effects.”
–Norbert Hankin of the Environmental Protection Agency (EPA)’s Center for Science and Risk Assessment

Many plastics, when heated, release toxic and endocrine (hormone) disrupting compounds into the food. So don’t microwave food in plastic, especially in plastic containers not labeled “microwave safe”. And styrofoam… well, just don’t go there.

The term “microwave safe” has mixed support – some say it’s legit, some say it’s not regulated. And by the way, exposing plastic to any type of heat (in the oven, microwave, campfire, etc.) has the same negative outcome. Microwaving just speeds up the process.

And most of us aren’t likely to try to use Tupperware as a frying pan. (Well, at least not after the… unfortunate… incident.)

Food heated in a microwave oven can have uneven temperature distribution. The food (or part of the food) with the highest water content heats up the quickest. This is why many oven models include a rotating tray: it distributes the waves more evenly.

So when you’re cooking or reheating, make sure the food is thoroughly heated, and occasionally turn or stir food if possible.

The great exploding cup of tea

Heating up liquids in the microwave can prevent bubbles from forming. The water can become overheated past the boiling point.

When the liquid is agitated (say by stirring it or dropping a bag of tea in it), it can erupt. So watch out and don’t set your tea to “volcanic”.

But there are potential harmful effects from too many electromagnetic frequencies, and doing without a microwave is one way to limit exposure.

If you use a microwave:

If you don’t use a microwave:

Microwave ovens and their hazards. Canadian Centre for Occupational Health and Safety. November 2, 2004.

Sugarman E. Warning: The electricity around you may be hazardous to your health. Simon & Schuster. 1992.

Steneck NH. The microwave debate. The Massachusetts Institute of Technology. 1984.

Video – History of the microwave oven

What happens to food in the microwave and in slow motion