Kettlebells are iron or steel balls with flattened butts on one end and a curved handle on the other.

Kettlebells are used both for general athletic training and competitive sport. They facilitate whole body dynamic movement for strength, endurance, and power training. They are used by sports teams, those who train at home, world class athletes, and folks who want to burn fat and build muscle. 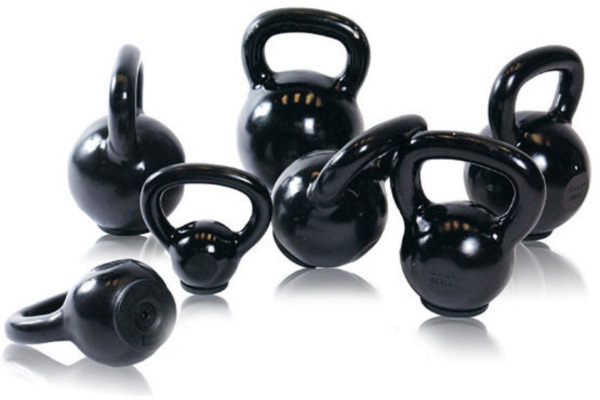 Humans probably devised a kettlebell-type object — a weight with a handle — not long after they figured out how to use their opposable thumbs.

Kettlebells, or things that seem to look like them, have been found in excavations of ancient Greece. It’s thought that implements like them were used in Russia initially as grain measures, with the approximately 16 kg, or one “pood“, being the standard measure.

Modern kettlebell manufacturers generally respect these weight conventions; thus kettlebell sizes range in 4 kg increments around the 16 kg “1 pood” standard (e.g., 12 kg, 16 kg, 24 kg and 32 kg). However, manufacturers are increasingly producing sizes in between the standards – like 14 kg and 28 kg, and masses as great as 60 kg kettlebells.

From obscurity to mainstream

Kettlebells have a long history in Europe and Russia from the 1700s onward, and were a feature of European gyms and strongman performances in the late 19th and early 20th century. Now, they are perhaps best known for their association with late 1940s Russian physical culture.

Their popular introduction to North America in the 21st century is largely credited to Pavel Tsatsouline, a Russian émigré, Special Forces trainer and coach. Along with his book The Russian Kettlebell Challenge (see references below), Tsatsouline concurrently began offering classes and a kettlebell trainer certification known as the RKC, now the oldest and most established kettlebell certification in North America.

Since their introduction in the West, kettlebells have slowly begun to emerge as a mainstream training tool with numerous trainer certifications being offered. Likewise, what is known as Girevoy Sport (GS) kettlebell competitions as formalized in Russia around the mid 1980s have started being held in North America. Valery Fedorenko is credited with the sport’s presentation in North America and is now mainly promoted through what has become the World Kettlebell Club.

Why are kettlebells important?

Because of their design, kettlebells enable many familiar movements from pushes like the shoulder press to pulls like Renegade Rows. Yet, they also support whole-body, dynamic weighted movements, once the specialized preserve of Olympic barbell lifters.

For instance, the foundational kettlebell movement — the swing — starts with a posture and hip drive similar to the deadlift or Olympic clean, but the cannonball-with-handle kettlebell design means that this weight can be swung up from between the legs, driven by the hip thrust forward to about chest height, and then accelerated down again by the shoulders pulling the weight down, back through the legs, then driven back up again with the hips, back and forth for reps. 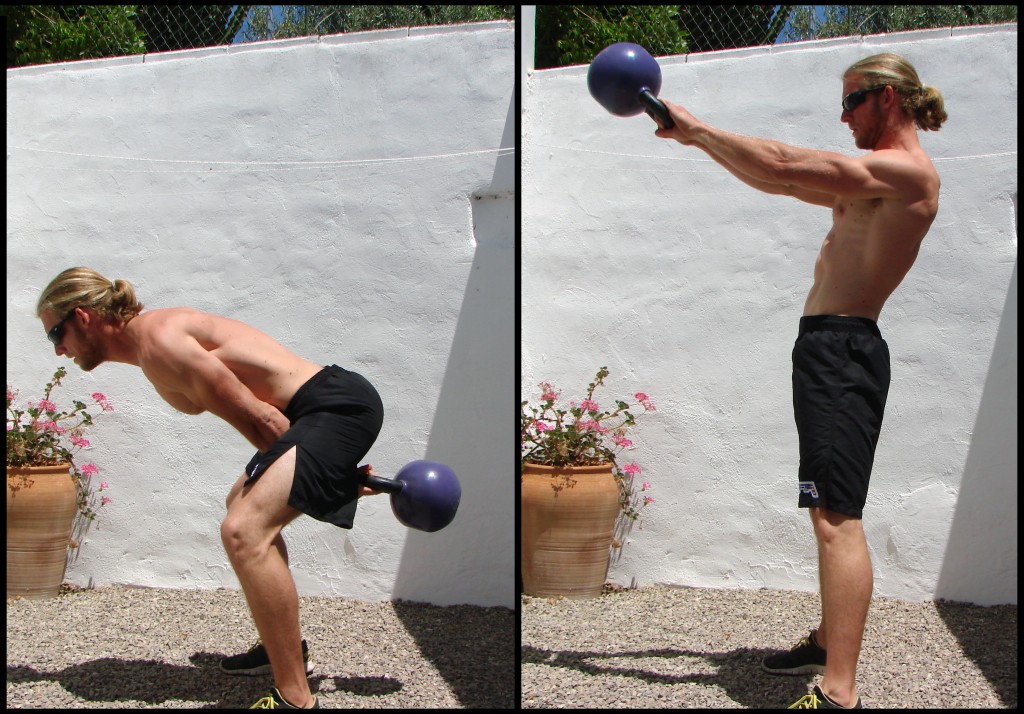 Depending on the mass of the kettlebell used, sets of swings are either very low-rep (3-5) with adequate recovery breaks, or high-rep (anywhere from 10-100 or more for time), depending on the energy system/strength type being trained. This demonstrates the versatility of the kettlebell — the same movement can be used for everything from maximal strength, to strength-endurance, to “cardio” or metabolic conditioning.

Hanging onto the kettlebell during swings also works the grip and forearms. Kettlebell swings can also be performed with two hands on one bell, one hand/one bell, or one bell in each hand for two bells at a time (doubles).

Other dynamic kettlebell movements like the snatch and the clean and jerk also develop full body strength, power and endurance, and besides being used for general conditioning, are the core kettlebell competition moves.

The primary advantage of kettlebell training is its efficiency. While it’s helpful to have a few kettlebells of different weights, one bell alone can give you a darn good workout.

Some people immediately fear for a lifter’s back when they see any dynamic movement of a weight at high speeds. Kettlebells can evoke a similar response in those unfamiliar with proper form.

Yet Stuart McGill, a leading back expert, is a strong supporter of kettlebells (and deadlifts). Lifters maintain spinal stability and neutral spine throughout the movements (notice in the photos above that the lifter never rounds the back, but keeps a natural curve).

That said, as with any skill, doing it right can be safe; doing it wrong can lead to injury.

“Safety first” is such a mantra in the kettlebell community that the staple training manual since 2006, Enter the Kettlebell (review), includes a chapter on safety and back health, and concludes with the warning: “If you get hurt, it’s your fault.”

When combined with proper nutrition, training with kettlebells seems to offer the benefits of intense interval training on bikes but with the strength development of weights. There are increasing numbers of weight loss stories where kettlebells, along with good nutrition, contribute to success.

Strength and conditioning (S&C) coaches like Jeremy Layport and Chris Holder are using the kettlebell to improve overall endurance capacity of their athletes. Even Lance Armstrong has been seen swinging kettlebells (below). 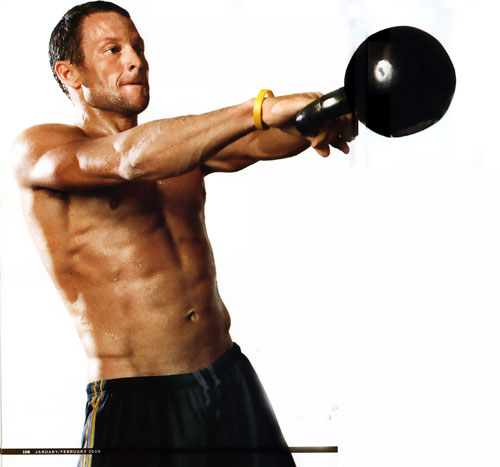 A basic S&C template that many coaches use with infinite variety is to alternate between kettlebell swings and Turkish get ups. For example, one partner does a Turkish get up to the left and to the right, while the other swings non-stop.

Getting more from one kettlebell

The kettlebell design also means it can be used in a variety of ways to extend the life of a given kettlebell weight.

Warning: Despite the great versatility of a single bell, kettlebells are also well-known to multiply. Partners of new kettlebell enthusiasts should be aware that claims of “I only need one, or maybe two — look, they take up no space” may still find kettlebells behaving like Tribbles.

Getting started: find a coach

The best start for any kettlebell user is to begin with a coach [see more at PN’s How to Find a Trainer].

A trained eye can evaluate key parts of foundational moves, such as:

A few sessions with a coach is the best way to help learn and refine these elegant moves.

The IKFF lists coaches who blend GS style with mainly bodyweight fitness training, or, one can go right to the Russian source with the IKSFA for a technique workshop.

A well-qualified coach will also be able to help anyone work up to a kettlebell swing and beyond, as some folks aren’t quite able to achieve that butt back swing position right away. So coaching is key: trying to swing kettlebells without proper form is about as safe as trying to deadlift with a rounded back.

Kettlebells are a fabulous and often overlooked tool for strength and conditioning. The mileage one can get from a single kettlebell is hard to match with any other training tool.

Whether looking for conditioning, fat burning, raw strength or power, it’s worth any practitioner’s while to investigate kettlebell training.

Early research in support of kettlebells

Most of the formal research on kettlebell training for performance is in Russian. We know it mainly from Pavel Tsatsouline’s translations and summaries like these from Enter the Kettlebell.

In the 20th century, Soviet science validated what Russian hard men had known for centuries: kettlebell lifting is one of the best tools for all around physical development. Voropayev (1983) observed two groups of college students over a period of a few years. To gauge their performance, he used a standard battery of the armed forces physical training (PT) tests: pull-ups, a standing broad jump, a 100- meter sprint, and a 1K run. The control group followed the typical university PT program, which was military oriented and emphasized the above exercises. The experimental group just lifted kettlebells. In spite of the lack of practice on the tested drills, the kettlebell group showed better scores in every one of them! Vinogradov and Lukyanov (1986) found a very high correlation between the results posted in a kettlebell lifting competition and in a great range of dissimilar tests: strength, measured with the three powerlifts and grip strength; strength endurance, measured with pull-ups and parallel bar dips; general endurance, determined by a 1K run; and work capacity and balance, measured with special tests. Lopatin (2000) found a positive correlation between soldiers’ kettlebell sport ranking and their obstacle course performance. Kettlebells improve coordination and agility (Luchkin, 1947; Laputin, 1973). Kettlebells develop professional applied qualities and general physical preparedness (Zikov, 1986; Griban, 1990).

The English-speaking world still lags behind with kettlebell research.

It’s been hypothesized that the swing also provides the forces necessary to generate increased bone density.

Kettlebell work is most often in the sagittal (back and forth) plane, but some experienced kettlebell enthusiasts break out of this box with kettlebell juggling, either as a solo or partner activity.

For folks who fall in love with these weights, there are the Girevoy Sport competitions.

In a competition, athletes have a fixed time to achieve a minimum number of reps in particular lifts at specific weight-class loads to attain one of several possible rankings in the sport. Competitions include the Long Cycle which is non-stop clean and jerk, the jerk, and the snatch.

Another form of competition is known as the Tactical Strength Challenge. This includes the kettlebell snatch, a deadlift and a pull up competition. It’s also fun.

Having a lighter and a heavier bell gives beginners the option to work on technique first, and heavier sets later.

Folks who have been sedentary for a long time may happily start lighter; more experienced strength athletes may prefer to go heavier. This article explains how to to pick a size appropriate for any level.

Almost more critical than the right starting weight is quality of the bell.

The shape, size and finish of the handle can make the difference between a good or horrible experience. Poor finishes can be filed down, but poor size or shape cannot be changed. A poorly designed/made bell may be cheap(er) but will be used once and abandoned. A good quality 16 kg kettlebell will cost about as much as a higher end pair of sneakers but will last for a lifetime.