All About Endocrine Disruptors

Every day we’re exposed to specific chemicals that mess up or hormonal systems. While that sounds nasty, there’s good news. Once you understand which to avoid, you’ll be better able to protect yourself.

That water bottle you just drank from? It probably contains an endocrine disruptor.

The carpet you just sat on? It probably contains an endocrine disruptor too.

That’s right, we’re constantly bombarded with hormonal manipulators. They’re everywhere. So let’s discuss the most common ones.  And, more importantly, what you can do to reduce your risk.

What endocrine disruptors do

The endocrine system consists of glands that release hormones.

Once released, hormones act like chemical messengers. They travel around the body, bind to target receptors on specific cells, and cause predictable cellular changes. 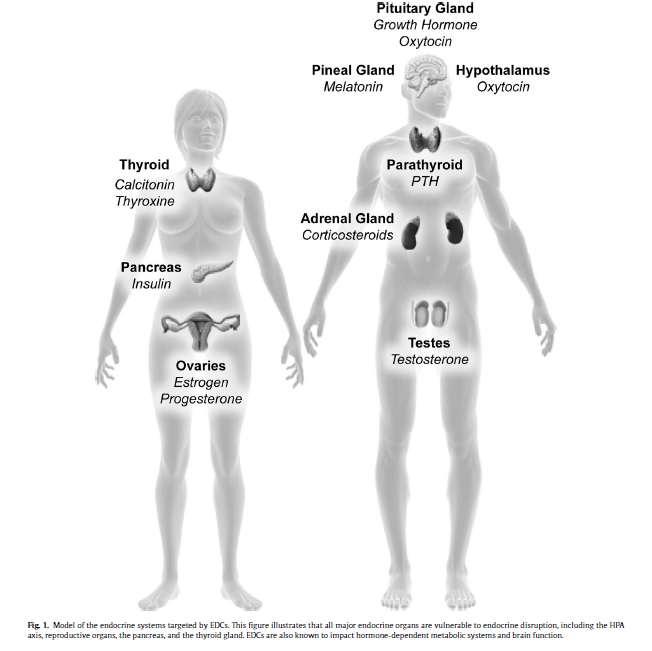 Endocrine disruptors (EDs) are interesting chemicals because they can mimic hormones. In doing so, they can bind hormone receptors and:

In the end, EDs can change hormone creation (synthesis), transport, binding, and breakdown.

And even very small amounts can have an influence. That’s why EDs are often measured in ppt (parts per trillion).

Also, EDs are very stable. In other words, they don’t break down quickly. This is why many manufacturers include them in products in the first place. Of course, it also means they stick around in water, air, soil, (and our bodies) for a long time.

Since our hormonal systems are critical to body function and health, when they’re changed by EDs, potential outcomes include:

Interestingly, a non-linear response has been observed in many EDs. This means that an ED might wreak havoc at very low and very high doses. But moderate doses might do nothing at all.

Why?  Well, moderate doses of EDs may be the only doses that elicit a strong enough protective response (relative to the dose) by our cells.

And we can’t forget about the potential “cocktail effect.”  With the wide variety of EDs coming into the body, effects might be cumulative and hard to isolate. 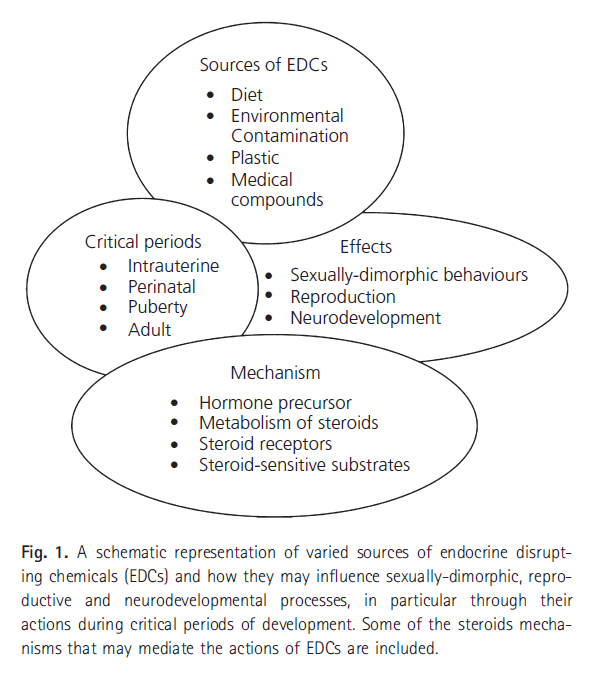 Source: Frye CA, et al. Endocrine disrupters: A review of some sources, effects, and mechanisms of actions on behavior and neuroendocrine systems. J of Neuroendocrinology 2011;24:144-159.

Where endocrine disruptors are found

With industrialization, more chemicals are produced. These chemicals make their way into the environment. As a result, EDs are found in:

There’s an Endocrine Disruptor Screening Program (EDSP) that’s currently making its way through an estimated 87,000 chemicals. While that’s a lot, it’s sad to know that the EDSP still doesn’t have authority for regulation.

The Canadian Environmental Protection Act requires regulation of any chemical that may have short or long-term harmful effects on biological diversity or endanger human health.

However endocrine disruptors are difficult to get rid of. Food contains both naturally occurring and synthetic EDs.

EDs can even be found in breast milk.

Studies in the U.S. show that pregnant women have substantial exposure to EDs. This exposure might influence long-term metabolic outcomes in offspring.

Some even believe that fetal exposure to EDs can lead to adult-onset disease. This is because children and infants are particularly susceptible to EDs.

The most common endocrine disruptors

Let’s go through some of the well studied EDs.

Found in: Pesticides. By-product of combustion.

Highlights: Forbidden since the 1980s but still linger in the environment and accumulate in the food chain. Resemble thyroid hormones. Interfere with transport and metabolism of thyroid hormones.

Highlights: Flame retardants are used on many products today in order to make them flame resistant. Polybrominated diphenyl ethers (PBDE) and Tetrabromobisphenol A (TBBPA) make up the majority of flame retardants used. Their similar structure to thyroid hormones can disrupt thyroid balance. They can alter androgen and estrogen signaling and accumulate in organ tissues over time. The top four food sources include meat, fish, dairy, and eggs. Well, except for infants. They get it from breast milk. Breast milk levels in the U.S. are 10-20 times higher than in Europe.

Found in: Meat. By-product of combustion.

Found in: Soy & other foods.

Highlights: Naturally occurring non-steroidal compounds that connect to and stimulate estrogen receptors. May have some beneficial health properties. Alcohol extraction and processing tends to significantly decrease phytoestrogens in soy foods. Infants consuming soy based formulas consume more phytoestrogens. Reasonable soy intake in men doesn’t seem to have any negative effects on testosterone or fertility. But building a diet around soy probably isn’t smart.

Found in: Some food packaging. Non-stick coating of cookware.

Found in: Plastics, food packaging, cosmetics, cleaning agents. If a product has “fragrance” or “perfum” it probably has phthalates.

Found in: Plastics, food packaging, the lining of many food/beverage containers. May leach from plastic into food/beverage at room temp and/or higher temperatures. Release into the environment can occur during manufacture, transport, and processing. Once we throw away plastic, it goes to the landfill and enters the soil and groundwater. The older plastic is, the more EDs it’s releasing.

Highlights: Agonist of estrogen receptor. More than 90% of the U.S. population is exposed to BPA and it’s not cleared rapidly from the body. Exposure has been associated with cardiovascular disease, diabetes, sperm anomalies, reproductive organ dysfunction, and altered immunity. Observations show harmful effects of BPA on wildlife. BPA has been banned in Canada by the Canadian Environmental Protection Act.

Highlights: Linked to allergies, asthma, CNS problems. May influence how thyroid hormones act in the body.

Found in: By-product of aerospace, weapon, and pharmaceutical industries. In drinking water and fireworks.

Highlights: Compromises iodine uptake into thyroid. Women might be more sensitive than men.

Found in: Wide range of products. Often in deodorants. Might also be in polyester fabrics.

Found in: Foods/gum as preservative.

Highlights: According to animal studies so far, appears to be carcinogenic.

Of course, these are just the most common (and potentially scary) ones. For more on EDs, see All About Environmental Toxins.

EDs and the planet

Data show that wildlife are suffering from exposure to EDs. And giraffes, unlike us, aren’t microwaving their food in plastic; they’re just living on planet earth, exposed to our by-products.

EDs can accumulate in:

Many EDs are derived from the incomplete combustion of fossil fuels. To prevent further burden, the major thing we can do as a species is consume less stuff. Consuming less stuff means less reliance on fossil fuels, the chief source of EDs. 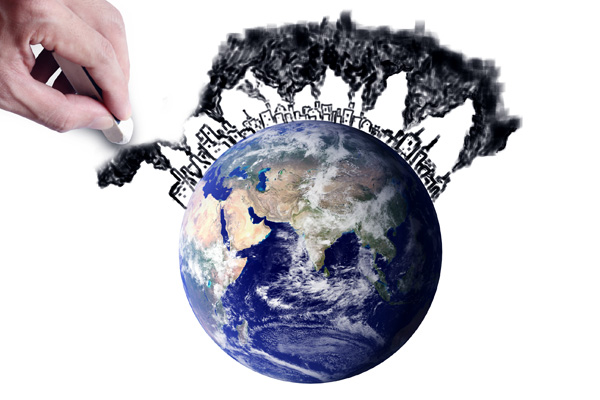 What can you do?

This all sounds a bit intimidating and depressing. But with some common-sense steps, you can reduce your ED load.

First, think about ways to reduce your exposure. One simple way to do this is to keep as many harmful chemicals as possible out of your house, and make easy substitutions for common household pollutants. Check out All About Indoor Air Pollution and All About Safe Cosmetics for ideas.

Be a critical consumer. Ask manufacturers what chemicals are in their products. Look for safer and eco- or body-friendlier alternatives as much as possible.

Help your body get rid of toxins. Eat the best quality, freshest food you can afford — organic if you can get it. Stay active and get your sweat on. Use infrared sauna. Make sure your liver is functioning well, and eat plenty of fiber. If you think you’re at risk, see a DO or ND for evidence-based detoxification protocols.

Use containers like glass, steel, ceramic, and aluminum when possible. At this point, these appear to be safer and better for the environment. Don’t heat things in plastic or Styrofoam containers; switch to wooden or metal utensils instead of plastic. Leftover jars of the right size and shape make pretty good salad or SuperShake containers!

EDs probably have an additive effect. So every little improvement helps. It’s better to make one small change than to worry about the things you can’t control. 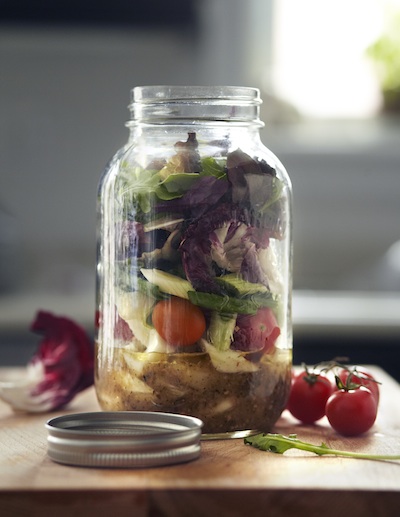 Frye CA, et al.  Endocrine disrupters: A review of some sources, effects, and mechanisms of actions on behavior and neuroendocrine systems.  J of Neuroendocrinology 2011;24:144-159.

Giwercman A.  Estrogens and phytoestrogens in male infertility.  Current Opinion in Urology 2011;21:519-526.

Janesick A & Blumberg B.  Obesogens, stem cells and the developmental programming of obesity.  International Journal of Andrology 2012;35:437-448.

Krause M, et al.  Sunscreens: are they beneficial for health? An overview of endocrine disrupting properties of UV-filters.  International Journal of Andrology 2012;35:424-436.