All About Drinking Water

Sure, drinking water is good for you — water does a lot of important things for your body. But did you know that bottled water is over four times the price of gasoline? And that barely 1% of the world’s water is safe to drink?  You might want to take a closer look at what’s coming out of the tap or bottle before you chug-a-lug.

“Thousands have lived without love, not one without water.”
–W.H. Auden

What costs more in North America: gasoline or water?

Surprise! Bottled water is ~$9 per gallon and current gasoline prices are under $2.

Hydration is the third largest global industry, behind oil and electricity. Americans spend almost $8 billion per year on bottled water.

To put this in perspective, that’s the same amount of money that the U.S. spent on economic aid in 2003. The U.N. estimates that it would require $30 billion each year to provide safe, clean, drinking water to the entire planet. Our world spent 3 times that amount on bottled water in 2007.

The Safe Drinking Water Act (SDWA) is the federal law in the U.S. that gives the Environmental Protection Agency (EPA) responsibility for setting national drinking water standards for the 250 million people who get their water from public water systems. Since the SDWA was passed in 1974, the EPA has set standards for more than 80 contaminants that may occur in drinking water and pose a risk to human health.

But do the standards protect the public or accommodate the industry?

Water will frequently contain some impurities, since minerals and containments are absorbed from surrounding structures. Some are minor contaminants, the ones that make water a bit dirty, discolored, or smelly. Then there are contaminants that cause things like cholera, hepatitis, and death.

The more serious contaminants to drinking water include:

Drinking water that is not properly treated or disinfected, or which travels through an improperly maintained distribution system, may also pose a health risk. The EPA reported that drinking water utilities will need an estimated $277 billion in upgrades before the year 2022.

Some of the more serious contaminants include lead, atrazine, arsenic and pharmaceuticals.

Lead contamination of drinking water is expensive and difficult to control since it generally enters the water supply via the corrosion of materials containing it. Since lead rarely occurs naturally in source water, it’s not treated at the facilities.

Atrazine is the top contaminant found in drinking water, ground water, and surface water. It’s an agribusiness chemical (think: herbicide) that is banned in the European Union.

It seems to act as an endocrine disruptor and is associated with cancer of the prostate, breast and ovary. It has been shown to “de-masculinize” male amphibians. 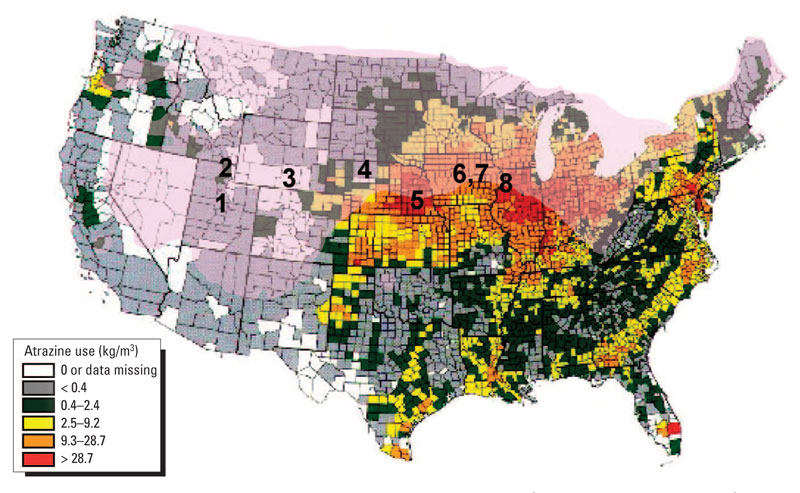 Use of atrazine across the United States

Although food is the most significant source of arsenic, drinking water is the other main source. Arsenic is commonly found in industrial processing and mining runoff, but also occurs naturally.

Long-term exposure to arsenic is related to increased risk of cancers as well as skin lesions such as hyperkeratosis and pigmentation changes.

Pharmaceuticals used for humans and animals are also starting to be found in drinking water. Furthermore, traces of household cleaning products, fragrances, cosmetics and by-products of the artificial sweetener sucralose (Splenda) are turning up. Heck, even Prozac has been discovered in the fish that swim in waters around Texas.

When 25 of the largest American cities were examined, only three had no water-quality violations. Water from all cities contained significant quantities of contaminants, including lead, chlorine and the bacteria E. coli, one of the most common causes of intestinal poisoning.

While the U.S. doesn’t keep records of who gets sick from tap water, experts have estimated that between 500,000 and 7 million people get sick from tap water each year. Because water also washes our food, our bodies, and our clothes, we probably eat and touch a lot more contaminants than that.

How does water typically get to your house?

If you live in a large city, water likely gets to your house from surface water sources like lakes, rivers, and reservoirs. In rural areas, water is likely to be pumped from a well.

If you live in “Backcountry Smallville” then your drinking water might be a little bit dirtier than if you live in a major city, mainly due to funding for water treatment and consumer demand.

When considering the safety of your water, think about the activities that occur around the water supply.

Is there a manure lagoon? A pulp and paper mill? Might want to look into that.

Are there endless fields of plants and trees? That’s probably a good thing.

Also consider the pipes that the water was delivered in, which, depending on the type, might contribute to higher levels of asbestos, toxic metals and other pollutants. Even your faucet can leave by-products in water, as older faucets sometimes containin brass alloy and lead. Probably not a good thing.

Why don’t we all just gather water from those pretty streams and lakes in the countryside? They look so pure and harmless. Well, remember that you wouldn’t be the only drinker. Insects and other animals drink the water, lay eggs in it, and can leave behind their waste.

Indeed, less than 3% of the worlds water is fresh and only one-third of that is drinkable — in other words, although the Earth is mostly covered with water we can only drink the barest 1% of it. (Read that sentence again before you leave the water on while shaving.) 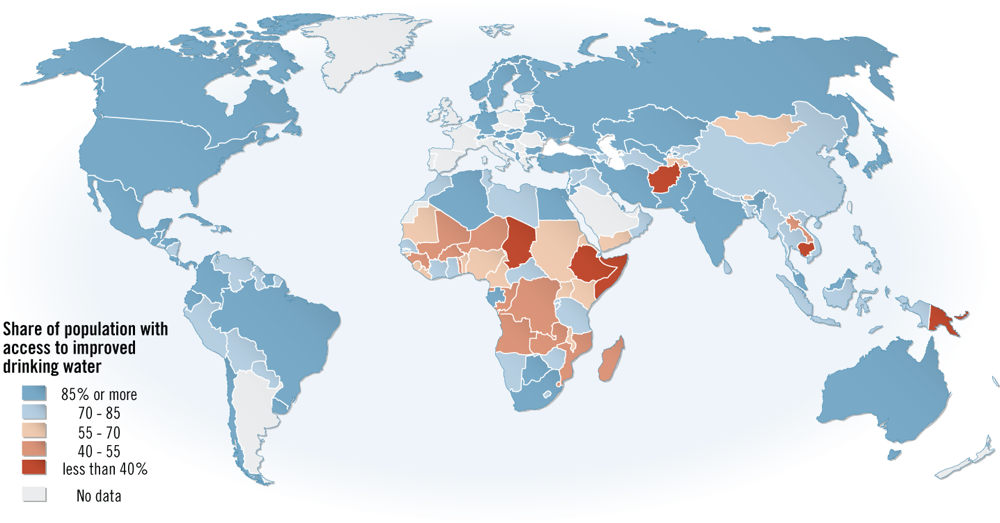 We need to treat our water before we drink it. When water goes from its natural source to the treatment facility, contaminants are removed and chemicals are added.

Nearly every water treatment facility uses chlorine as a disinfectant. Chlorine can create harmful compounds when it combines with certain organic chemicals, which may cause some health concerns.

Fluoride has been added to water since 1945. While many countries use fluoride in water (like the U.S. and Canada), many countries don’t (like Austria, Germany, and Japan).

Fluoride has the same toxicity as lead and arsenic; thus, not all major health groups support fluoridating water.

Before protesting outside the local water treatment facility, it’s important to realize that water treatment means that most industrialized countries have very safe water.

Each year in developing countries nearly 2.2 million people (equivalent to the population of Houston, TX), most of them children, die from diseases associated with lack of safe drinking water and inadequate sanitation. That’s almost 5,500 people each day — just because they don’t have clean water.

While we don’t have much water to use, we act as though it’s an infinite resource. 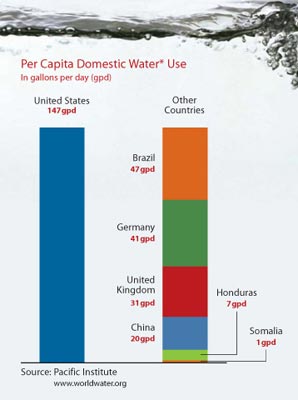 Per capita domestic water use, in gallons per day

What about desalination? Can’t we just use all of the abundant salt water, get rid of the salt, and drink it? Well, desalination removes ions that are essential for plant growth. That means the water isn’t very useful for agriculture. But it still looks to be a workable option for the future.

There are many ways to clean water. The four basic water purifiers include filters, reverse osmosis, distillers and ultraviolet units.

Charcoal filters absorb and modify pollutants. Reverse osmosis depends on water pressure and doesn’t accumulate pollutants over time (like a charcoal filter). Distillers use a lot of electrical power, as the water is boiled to create water vapour, which can help to kill microorganisms. All of these filters may actually introduce new pollutants while removing others.

A guide to water filters can be found here.

Bottled water doesn’t appear to be any better, safer, or purer than tap water. In fact, according to the Food and Drug Administration in the U.S., less than one person is regulating the entire bottled water industry.

Request a report that shows the quality of your local water. It’s usually free, but it might not cover all of the potential toxic chemicals. Inquire about polyelectrolyte flocculants. If those are added during water treatment, it should warrant further investigation.

Consider buying a home test kit or use a lab to test your water. Make sure it’s not bogus – do some research. See here for more on water testing.

If your water is clean, then using tap water is likely your best option. If your water requires some cleaning, then investigate a water purification option – see here for more.

Challenge your daily water use. Consider the following ideas to shrink your water footprint.

Leave it to nature

Watering our lawns sucks up major water. Buying a rain sensor and letting nature do its job can be helpful.

Consider xeriscaping, or planting native species that don’t require additional watering. You can save 75% of the water you’d typically use for watering your lawn and garden.

About 1/3 of our country’s drinking water is used to brew coffee, and a lot of that goes to waste when we pour out what’s left in the pot. If every household measured more accurately and saved just a cup of water each time, America would conserve about 7 million gallons of water a day. We would also save the 259 million gallons that would have been used to grow the wasted coffee beans.

Don’t pre-rinse dishes for the dishwasher, and run it only when it’s full.

This can save you 7,300 gallons of water a year. That’s as much water a person drinks in their lifetime.

A commercial car wash uses nearly 100 gallons less per wash than hand washing. The facilities often recycle the water they use too.

Put a brick in your toilet tank to reduce the amount of water used per flush by around one gallon.

Buy more whole foods such as vegetables, beans, fruit, rice, and potatoes. Processed foods and drinks (chips, premade meals, soft drinks) take a lot more water to produce than those that come from the farm.

Other interesting information about water

How many cups of water does it take to make a cup of coffee? If you answered one, you’re way off the mark. When you factor in the water used to grow the beans, the answer is more like 590.

Water is the only substance found on earth in three forms solid, liquid, and gas.

Over 47 million barrels of oil per year are used to produce plastic bottles (many of which are for bottled water).

More than 700 gallons of water are needed to grow enough cotton to make a t-shirt.

Here’s an infographic that calculates the true cost of bottled water.

Yep, we know…the health and fitness world can sometimes be a confusing place. But it doesn’t have to be.

EPA Drinking water and health. What you need to know. Office of water. October 1999.

Royte E. Bottlemania: How water went on sale and why we bought it. Bloomsbury. 2008.